Emperor Hadrian that the Picts are planning an attack on Hadrian’s Wall.

They must run the 26.3 miles from where they are based in Corbridge to

Will Form II be victorious? Can they run the marathon and save Rome?

Community involvement has never been so important and at The Froebelian School, Horsforth, despite the majority of children home learning, charity activity hasn’t slowed down.

This term, children in Form II (Year 4), whilst observing Government Coronavirus guidelines, ran a Roman Marathon to help Emperor Hadrian protect Hadrian’s Wall, as part of their project about The Romans, and to raise money for Yorkshire Air Ambulance. They also created a video documenting the event. Watch The Video Here

Over £1000 has already been raised for the charity.

Mrs Dodds said: “Whilst we continue to learn from home, our community involvement is still of utmost importance. Not only have we raised £1000s for The Yorkshire Air Ambulance but there is scientific evidence that contributing to our communities and making a positive difference to the lives of others is good for our mental health.”

She continued: “Our pupils, staff and parents have shown true Froebelian spirit in this project, with children and staff pulling together to ran one mile each to complete the marathon. Like me, I’m sure Emperor Hadrian would have been proud of their efforts!”

Donate at this Just Giving page

Yorkshire Air Ambulance is the designated charity of the year at The Froebelian School.  To date, we have raised over £4500 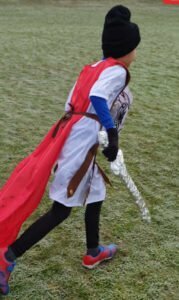